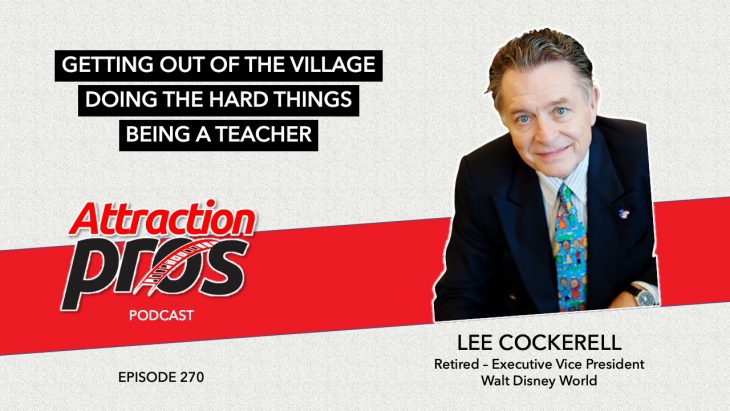 Lee Cockerell is the former Executive Vice President of Walt Disney World, and after retiring in 2006 formed Cockerell Academy where he consults on leadership and management.  Lee grew up on a farm in Oklahoma where his family was “poor as mice.”  They lacked modern conveniences like outdoor plumbing, and his mother was married five times.  Lee joined the army after dropping out of college, where he met someone who led him to be a server at the Hilton in Washington, D.C.  Despite no knowledge of the hotel business at the time, he learned the business, moved his way up, then worked for Marriott for 17 years.

In 1990, Lee was hired by Disney as Vice President of Resorts for Disneyland Paris, and after a few years took on the role of Senior of VP of Operations at Walt Disney World in Orlando, and then served as Executive Vice President of Operations at Walt Disney World for nearly a decade until his retirement in 2006.  Today, Lee uses his wealth of experience with Cockerell Academy to help companies enhance their leadership, management, culture, and customer service.  In this interview, Lee talks about getting out of the village, doing the hard things, and being a teacher.

Getting out of the village

“My advice is to get out of the village.”

Lee provides excellent career advice throughout this interview, and shares that three things necessary to advance in your career are knowledge, experience, and exposure.  Knowledge can be learned through formal education, but in his case, it came through experience.  By joining the army and then later working as a server, he learned business and leadership by immersing himself into it.  This could only happen by leaving his small town in Oklahoma.

In addition to the education it provided, it also allowed him to see a much wider perspective of the world than he had at home.  Getting out of the village is both a literal and figurative statement, in that we all need to have exposure to diverse viewpoints and lifestyles that will enhance ourselves, along with how we lead others.

“When you don’t do the hard things, the stuff gets harder.”

It’s easier to procrastinate or hope that problems sort themselves out on their own than it is to deal with them head-on.  However, Lee stresses that the sooner the hard things are dealt with, the better the solution is, regardless of what the problem might be.  Without addressing it, the problem festers and ultimately becomes even more difficult to deal with down the road

The best example that Lee gives is when a team member or leader is not the best fit for the company, letting them go can be a difficult and emotional decision.  In one story, Lee shared that a consulting client let go of someone who had been with the company for 20 years, and when asked how long ago it should have been done, the client responded that it should have happened 10 years earlier.

“Teaching is what we should all strive to do.”

By gaining knowledge, experience, and exposure, we all have the opportunity – and even the obligation – to impart our wisdom onto others.  In leadership, we can make the choice between being a boss or being a teacher.  Lee’s guidance is that we should all strive to be teachers, because our leadership will be more effective and impactful for the long run.  A boss is someone who tells others what to do, whereas a teacher guides others toward the best outcome.

To learn more about Lee, visit www.leecockerell.com.  From there, you can learn about Cockerell Academy, Lee’s podcast, and Lee’s books.