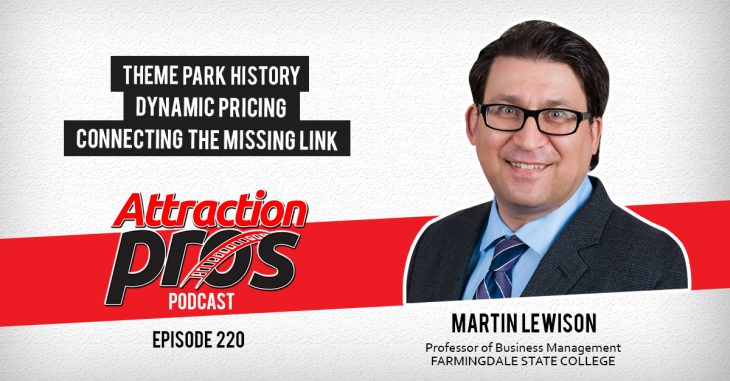 Martin Lewison, PhD. is an Associate Professor of Business Management at Farmingdale State College on Long Island, NY.  Among the variety of courses Martin teaches, one of them is Theme Parks and Tourism, and much of his time is focused on research in the theme park industry.  As part of his research, Martin visits parks, rides roller coasters, and looks at the guest experience and operations to further understand what is working the best.  Martin brings back his findings, whether through onsite or offsite research and incorporates them into his academic focus, which includes tourism management, mergers and acquisitions, and the economics of pricing.  In this interview, we talk about dynamic pricing, theme park history, and connecting the missing link across history which has led to the technologies and experiences that we have today.

“If I can charge the price that everyone’s willing to pay, that’ll maximize revenue.”

Many of the elements of pricing that hotels, airlines, and rental cars deal with apply similarly to the theme park industry.  Many years ago, theme parks would paint their admission price on a piece of wood, hammer it into the wall, and that was the price.  This static pricing leaves money in the table, as there is a subset of people who will not pay that price, and there are also people who would pay more for that price.  Flash forward to today, many parks use television screens in all revenue areas, whether it is admissions or even food and beverage, allowing more flexibility in controlling the price.

Slagharen, a theme park in the Netherlands, was one of the pioneers in the theme park industry when it comes to dynamic pricing.  If you charge one price, then that’s the price that the customer sees.  If they’re willing to pay that price or more, then they’ll pay that price.  In an ideal world, you would be able to scan every guest and determine the maximum price that they are willing to pay.  Since we can’t see this, airlines and hotels utilize “rate fencing” to maintain revenue by segmenting their customers – in this case, business and leisure travelers.  These segments have different needs which will determine the elasticity of the demand, thus the pricing can be shifted based on the demographic that’s being served.

While the airline and hotel model doesn’t apply directly to the theme park industry, what theme parks have begun to do is signal guests for what is a premium experience.  Guests who are willing to pay the higher price are given the signal and those who have less elasticity are more likely to buy.

However, you cannot have a conversation about dynamic pricing without talking about the ethics of doing so, and how parks have managed the backlash and criticism.  For instance, the discontinuation of Disney’s complimentary FastPass system marked one of the last free programs that guests have to bypass the queue.  Martin’s responds by indicating that buying the premium product does in fact entitle the guest to the premium experience, relative to the other guests in the park (even though it may not be premium compared to visiting on another day when demand is less).

In many instances, it comes down to parents making the determination to take their children out of school during offpeak times.  Since much of the world follows a similar school schedule, peak and offpeak pricing encourages people to come during offpeak times, which requires parents to make the decision of whether their kids can miss class, or if they will pay the peak price.

As a management professor, Martin says that he teaches his class that they shouldn’t leave money on the table, but as an ethicist, he says that you cannot alienate your biggest fans.

“One of the reasons people love theme parks so much is because of nostalgia.”

When Martin worked on Wall Street, he claims that the stress of working in finance was such a burden that on Friday afternoons, he and his wife would jump on a plane to just about anywhere where they could visit a theme park and ride roller coasters.  To date, Martin has visited more than 800 theme or amusement parks and has ridden more than 2,100 roller coasters.

One of the biggest reasons that the theme park industry has survived, thrived, and evolved, is because the desire to go out and have fun with your family is universal.  While much of the United States is considered to be a mature market for the theme park industry, Martin points out that there are currently major regions that don’t have a theme park, and that there are several parks that thrive despite their lack of connection to a large population center.

Martin shares a brief overview of parks that he has visited throughout the world, from obscure attractions in South America, to how meticulously immaculate Tokyo Disneyland is, and how beloved Efteling is in the Netherlands.  Martin suggests that Americans should focus on traveling more, and specifically for enthusiasts, to see more of the theme park industry aside from the usual parks that they visit.

“Everything we know about history, we know because somebody went through papers, dug up things, and documented what happened.”

As part of his research, Martin has traced the early roots of entertainment, largely through the World’s Fair, long before the technology that we have today was available.  From the early nickelodeon attractions which involved watching movies through turning a crank, and glass that was painted and lit up by a candle, Martin makes the comparison between experiences like this and attractions that we enjoy now, such as the flying theater in Pigeon Forge.  Martin highlights “The New York Experience,” which was a standalone attraction in Manhattan, that was tech-savvy for its time, and later influenced what we observe today as being high-tech.

Coming up next on AttractionPros:

"We want to meet our team members where they are, and give them the experience internally."

"At the end of the day, it comes back to the relationships that we have with our team members."

“Bring positive energy so that when they get on the floor, we’ve been modeling that type of experience."

"We need to put people first."