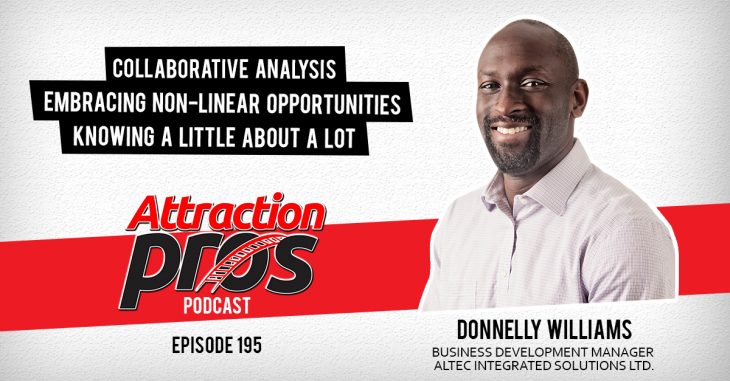 Donnelly Williams is the Business Development Manager at Altec Integrated Solutions Ltd.  Altec provides state-of-the-art ride controls, safety systems, and show controls to theme parks and entertainment OEM’s worldwide.  Altec works with their customers to solve their toughest control and safety challenges using Altec’s depth of experience and the latest technology to provide innovative solutions.  As the industry begins its pandemic recovery, Altec looks forward to expanding their show action equipment business in addition to the ride controls and safety systems they are known for.

Donnelly grew up naturally curious about everything around him.  He would often take apart his toys to understand how they worked.  Donnelly was also captivated by movies, and he decided that he would love to work on visual special effects some day.  An episode of the TV show, Magic Mirror, helped Donnelly discover that mechanical engineering was what he would study in college in order to realize that goal of working on movies.  On the show he saw a mechanical engineer working on an animatronic, and he knew that was the career for him.  After college, Donnelly had a variety of engineering and project management careers.  At one point, he accidentally found his way into the theme park industry while working for Dynamic Attractions, then Dynamic Structures.  While he enjoyed the mechanical and structural side of the projects he worked on, Donnelly’s natural curiosity made him want to understand more about the controls and electrical side of projects too.  To learn more about these topics, Donnelly returned to school with this new focus.  Upon graduating, he chose to stay within the attractions industry he had found and began working for Altec, where he has been for the past eight years.

One of Altec’s greatest strengths is that they get involved at the very beginning of the ride development process, working during the early project commissioning stages to deeply understand the customer’s requirements, expectations, and vision.  Because of their involvement so early in the process, Donnelly and his team have ample time to assemble the right team to make the customer’s dreams come true with the highest possible quality.  From the early stages to the launch of the new ride, there is a relentless focus on safety.  Throughout the process, the team works to identify potential risks and hazards of the attraction and mitigate those risks as much as possible.  Risk management on theme park attractions can happen in many different ways:  design changes, mechanical or electrical solutions, controls and sensor-based options, or even operational guidelines.  These operational mitigation strategies could include suggesting what is said during a ride attendant’s safety announcements, change the way restraints are checked, or even create strict guidelines as to what height a guest must be in order to safely enjoy the ride.

Donnelly grew up with a passion for movie-making and special effects, but that industry wasn’t particularly prominent in the area of Canada where he grew up.  In order to have the chance to learn the skills necessary to break into the industry he admired, Donnelly saw opportunities to learn and grow in related fields.  For example, there weren’t any animatronics companies near him, but there were oil and gas corporations.  While they didn’t make singing and dancing robots, oil and gas utilize robots in other ways, such as cleaning out pipes.  While the robots themselves have different goals, they are made of many similar components and require similar controls protocols to program and operate.  Similarly, Donnelly took a job at one point in his career where he designed HVAC systems.  Knowing how to manage requirements, design systems, and create engineering drawings is a useful skill in almost any industry.  All of these opportunities helped build up Donnelly’s skill sets as he made progress towards ultimate career goals.

When asked if he had any advice for individuals that were laid off during the pandemic and were apprehensive of “starting over” in a new role or industry, Donnelly shared the fact that you never really have to start from scratch.  Many skills transfer well between industries, from soft skills to technical engineering experience.  Donnelly shared that a few times during his career, a move to a new role required a step down the corporate ladder.  However, his previous experience from other roles allowed Donnelly to take even larger steps up the ladder once he had a chance to find his place in the new company.  This fact is one reason that Donnelly stressed the importance of not getting caught up in whether a new role required a temporary step backwards.  Instead, he emphasized focusing on the end goal and what lies ahead.

Donnelly also emphasized the importance of finding and showing your passion, whatever that may be for.  As an example, he talked about a TV show that he watched with his family about skateboarding.  Donnelly was impressed by the passion that was on full display in the show.  Even though he previously had no desire to learn how to skateboard, this show got Donnelly thinking that it could be fun to try since everyone in the show looked like they were having a blast.  Passion is truly infectious and can really have a positive effect on projects and the team members that are working on them.  Another thing that Donnelly demonstrates and suggests others try too is tackling challenges or weaknesses head-on instead of avoiding them.  For example, Donnelly shared a story about how he had to give a toast at a wedding where he was a groomsman.  It went very poorly, but instead of choosing to hide from public speaking forever, Donnelly joined Toastmasters and worked very hard to improve his communication skills.  This decision to tackle something that scared him would eventually help Donnelly be a better overall leader because of his improved public speaking ability.  He advises that you never know when tackling one of your biggest challenges or fears might lead to the next great opportunity.