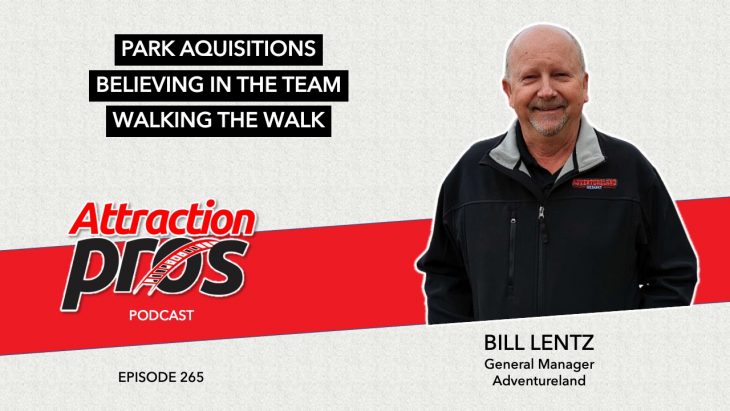 Bill Lentz is the General Manager of Adventureland Resort in Altoona, IA.  Bill has worked in the hospitality industry for his entire career, starting with selling merchandise in sports venues.  Bill began working at Knott’s Berry Farm in 1989 as a Retail Operations Manager, and soon took on the role of General Manager at Soak City in Palm Springs and then at Great America in Santa Clara, while also overseeing operations at Gilroy Gardens.  Bill’s career then took him to Palace Entertainment as the VP of Water Parks in the United States, Wet n’ Wild in Sydney, Australia, overseeing animal parks, as well as General Manager at Miami Seaquarium until Bill moved to Adventureland in early 2022.  In this interview, Bill Lentz talks about park acquisitions, believing in the team, and walking the walk.

“Whether you’re buying or selling, the team that’s in place, they need that team.”

Bill’s career background has taken him through several acquisitions of parks, both on the side of the business acquiring the park as well as the park being acquired.  This has led to a unique perception of how acquisitions impact the individuals working for a park in the middle of a transition.  When a park is being acquired, team members need to know where they stand in terms of job security.  The park always needs a team to operate; therefore, being immediately transparent is key.

Additionally, teams should prepare themselves for procedural changes if they are entering a larger corporate structure from a smaller operation.  For example, when Bill arrived at Adventureland, Bill states that the park was very well run, although they needed to adapt to Palace’s methods and processes.  In an independently-owned property, decisions are often made by approaching the owner of the park; however, in a corporate structure, there are more layers to large decisions.

Believing in the team

“You’ve got to show that you believe in the team, and they’ll give you a chance and believe in you.”

As Bill entered Adventureland for the 2022 season when Palace Entertainment acquired the park, he stated that it was critical that he showed that he believed in the team in order for the team to believe in him.  This way, Bill would be able to balance coming into the park in the executive level while also recognizing the manner in which the park operated long before his arrival.

Bill is a big believer in listening and not overreacting.  At Adventureland, employees range from 14 year-olds to senior citizens, and they work well together.  When making changes, there were naturally questions that arose, but when the team has the opportunity to ask questions, it leads to thoughtful discussions that further help gain buy-in.  Additionally, giving the team the chance to show you how they may take on certain tasks demonstrates that you trust them, which makes it easier to gain trust in return.

“I don’t expect any different treatment than I give somebody else.”

There is no job that Bill will ask someone to do that he won’t do himself.  When Bill was at Miami Seaquarium, a team member saw that he was unloading a food truck and asked him why he was doing it.  Bill replied by saying, “Because it’s my job.”  As every leader knows, whenever you get promoted up the chain, everybody’s watching you, and the way you treat your team is a true reflection of your leadership style.

Bill also stresses the importance of calling employees by their names.  Using the names of your team members demonstrates your commitment to mutual respect and that you are walking the walk.  He also highlights how effective open communication can be, as well as the fact that tough conversations should be to the benefit of the employee and their overall success.

Bill states that one of the favorite parts of his job is coaching employees to improve their performance and seeing those he works with succeed.  The biggest lesson from the early days of his career is to respect everyone you work with, and that he does not expect any different treatment that he gives somebody else.

To learn more about Adventureland, visit www.adventurelandresort.com.  To get ahold of Bill directly, you can email him at bill.lentz@palaceentertainment, and he promises to reply quickly!