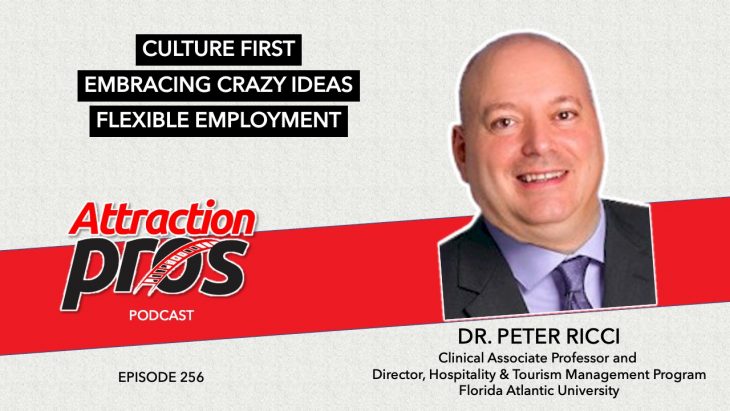 Peter Ricci, EdD. oversees the Hospitality and Tourism program at Florida Atlantic University in Boca Raton, FL.  Peter has worked in the hospitality industry since he was 14 years old as a dishwasher in a restaurant, where he was later promoted to busser and then promoted again to server.  Throughout his career, Peter has worked in hotels, restaurants, events, travel agencies, airlines, destination marketing, and more, including moving 21 times in 12 years to open new hotels or fix broken ones.  In this interview, Peter talks about culture first, embracing crazy ideas, and flexible employment.

“I would go in and fix the culture first, and then the money would flow through.”

Culture occasionally becomes a victim of stock trading value.  When companies need to cut budgets, it is usually line items that influence the culture that are more difficult to measure that are cut in the interest of efficiency and cost savings.  Even luxury brands have cut so much to their own detriment that they have a difficult time maintaining excellence compared to the past.

Leadership needs to walk the walk and breathe the culture every day.  Peter shares an example of a property that ranked 240 out of 250 in the portfolio regarding service scores, and he went in as the GM role to fix the culture.  For the first six months, he spent multiple hours a day focusing on training employees across all departments.  When it was time for Peter to move to another project, the property increased its ranking to the 30s, due to his focus on culture.

A few years later, the property was sold at a $9 million profit.  Stock value is important, but we are in the people business, and the culture drives the value of the business.

Peter’s idea was embraced immediately by the dean, and plans were put into action.  Normally, about 100 people complete the certificate a year, so an optimistic projection was set for 500 due to offering it complimentary.  As word got out, the program generated 77,000 enrollments, and more than 85% of those who enrolled completed it.

This initiative, which started as a crazy idea, went viral, leading to significant donations to keep the program going at an affordable cost, incredible exposure for the university, and an immense amount of gratitude from participants.

“What if we let employees pick the benefits that they want?”

The challenge today is to find quality talent who is passionate about the job amidst other industries that allow remote work and more lenient hours.  Peter’s focus for the next five years is to help employers in the hospitality industry be more flexible.  Flexibility for one person might be a workweek consisting of four 10-hour days, and for another employee, it might be a daycare benefit instead of medical.  Benefits such as pet care, rent subsidy, or partial car allowance are benefits that won’t appeal to everyone, but for those that they do appeal to, they resonate strongly.

There needs to be a meaningful hook beyond the hourly or salary wage to attract the best talent.  If employees could pick their own benefits from a buffet-like offering, it creates a more meaningful and personalized employment experience.

To contact Peter, connect with him on LinkedIn or email him at ricci1@fau.edu.  To learn more about FAU’s Certificate of Hospitality and Tourism, click here.