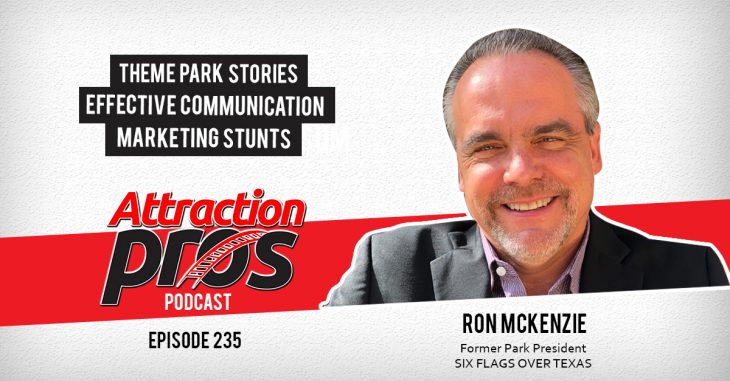 Ron McKenzie is an attractions industry veteran who was most recently the Park President of Six Flags Over Texas. Ron has a wealth of experience both leading attractions teams and marketing and selling the fun that we produce. In this episode, Ron shares many of the great stories from his career, discusses effective communication, and pulls back the curtain on some of his favorite marketing stunts.

“I was handed a phone book, and told, go sell something.”

Ron started with Fiesta Texas (before Six Flags took over) in 1993. New to group sales in a theme park, Ron admits he didn’t know what he was selling, but it was great to be in waiting rooms with others who were selling copy machines, etc., because he knew that his product was so much more fun.

Ron has so many great stories about his time in the industry, and he is happy to share them! So many people talk about creating stories that guests get to experience, but we may forget the stories that happen to us as we are creating those memories and special times for others. Those are really important stories, too.

“Leadership is all about effective communication, trust, and getting people to believe in what you are trying to accomplish.”

Sometimes the best ideas grow out of necessity or a whim. Ron shares that during the hectic days of re-opening that he would stop by the employee cafeteria for a bite to eat and would sit outside. He had no idea that the team members would respond so positively by taking the time to talk to him, share what they loved about their jobs and where they wanted to go in life.

The time to interact with team members became Ron’s favorite time in the park. There were times that he couldn’t finish a meal because so many people were talking with him, but he felt, as a leader, that’s exactly where he was supposed to be. Communicating, listening, and sometimes even giving people a little nudge to keep moving forward.

“At that point in my career I knew a lot, but did not know how to pull off a guy jumping 26 cars in our parking lot.”

Of all of the significant marketing initiatives and experiences Ron has had, he shared that one of his greatest highlights was working with Robbie Knievel as he attempted to jump 26 Dodge Chargers in the Six Flags St. Louis parking lot to announce the opening of their new wooden coaster.

Ron shares that one of the best things about working with Robbie was that he got to learn so much more about Robbie’s dad, Evel Knievel, who was someone Ron looked up to as a kid. This also led to an unfortunate picture of Ron and Robbie that made it into the local paper!

To connect with Ron, you can find him on LinkedIn.