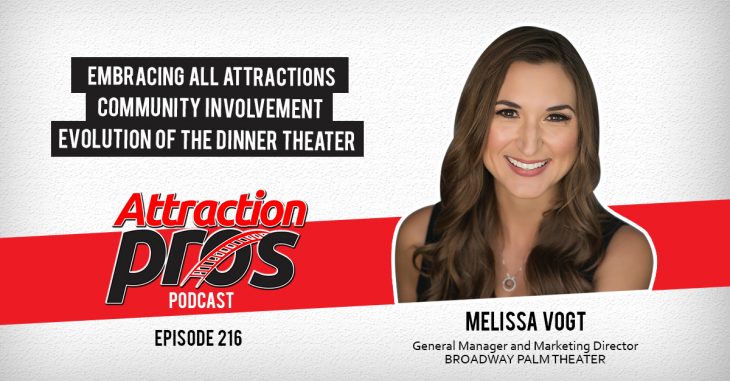 Melissa Vogt is the General Manager and Director of Marketing & Public Relations for Broadway Palm Dinner Theatre, which opened in 1993 in Fort Myers, which is the heart of Southwest Florida.  Melissa joined the Broadway Palm team in 1998 in an entry-level position, and has held many roles in marketing, sales, and nearly every front of house aspect of the business until taking on the role of General Manager in 2021.  In this interview, Melissa talks about the importance of being involved in the local community as well as industry associations, how the dinner theater has evolved over time, including prior to the pandemic and how it will continue to evolve into the future.

“Form relationships. That’s the best advice I can give.”

As a resident of Southwest Florida since she was six months old, Melissa is ingrained in the community.  Melissa talks about the importance of partnering with hotels and other attractions, including a combo ticket with the Edison Ford Winter Estates that discounted both venues.  She also shares the benefits of the local convention and visitors bureau and attending various networking events so that Broadway Palm stays top of mind everywhere she goes.  This leads to great partnerships, as well as increases in ticket sales, along with events held at the theater.  Melissa stresses that the Southwest Florida region is a relationship area, not a sales area, and the power of networking and forming relationships far exceeds the power of sales.

Broadway Palm has also been involved with the Florida Attractions Association for decades, and Melissa was inducted to the association’s board of directors in August 2021.  Her board position includes advocating for the industry and for the association, and ensuring that members are engaged and involved with all of the benefits that FAA has to offer.

Evolution of the Dinner Theater

“This is not your parents’ dinner theater anymore.”

The dinner theater is a dying industry, which has required Broadway Palm to reinvent itself numerous times in order to stay relevant.  Certain trends have dictated changes to the structure and layout of the theater, such as guests no longer wanting to be bussed to the theater and herded through the buffet line and then sitting with strangers.  The programming has also changed, including hosting concerts, bringing in shows that attract their audience, while also aligning the experience with the family demographic.  Melissa says that they cannot be looked at as “chew and view,” which is how dinner theaters are often viewed as.

As General Manager and Director of Marketing & Public Relations, Melissa bases her decisions not only on what impacts her staff, but also the guest.  Melissa is focused on communicating to guests how the theater has changed in an ever-changing landscape of the business.  This requires a strong focus on both roles, marketing and management, to ensure full alignment.  In response to the pandemic, Broadway Palm reduced capacity which allowed them to space out tables, which has been positively received due to an increased comfort level for guests.  Due to the favorability, the structure will remain at least through 2022.

Going into the future, Melissa predicts that there will be continual evolution of shows, seating, menu items, and the ways that they serve people, based on continually changing consumer trends.

When people challenge whether Broadway Palm is an attraction, Melissa stresses that she serves the local market along with those who are visiting the Fort Myers area for various reasons.  While people may not visit Fort Myers specifically for Broadway Palm, Melissa states that they fit into the tourism market by being something in addition that visitors can do while they’re in town, rather than creating marketing campaigns in regions outside of Florida to attract people directly to Fort Myers.

Oftentimes, art, culture, and attractions are overlooked by local governance, without recognition of their contributions to the community in terms of revenue, tax dollars, and the enhanced value that they bring.  Melissa says that the voice of the attractions family in Southwest Florida is to advocate for the industry to share the importance of all that they do.  Additionally, by collaborating with other attractions and through the Florida Attractions Association, Melissa talks about the value of visiting other FAA attraction members who all share the same goals of fostering the continued growth of the Florida tourism industry.

Melissa also says that despite her new role as General Manager, she knows the small details that it takes to get things done, and isn’t afraid to jump in whenever it’s needed.  She also speaks strongly against micromanaging employees when they can be trusted to do their job well, and the importance of not letting ego get in the way of leadership.