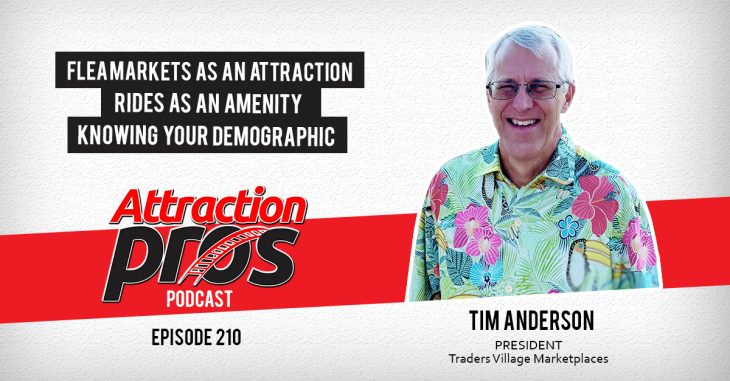 Tim has years of experience within the attractions industry.  He got his first job as a game operator at the now-closed Six Flags AstroWorld in Houston, Texas.  He continued to work there throughout high school and college.  Upon graduating college with an economics degree, he originally planned on going to law school; however, he found himself being pulled back to Six Flags.  After working in management at Six Flags Great America for about five years, Tim had the opportunity to develop and open the Kellogg’s Cereal City USA attraction in Battle Creek, Michigan.  He loved getting to be a part of the design and opening team and stayed on as its general manager for a few years.  After that, Tim became the general manager of Landry’s Kemah Boardwalk off Galveston Bay.  It was after that role that Tim found his way to leading Traders Village Marketplaces where he has been for the past 12 years.

Traders Village sees over 6 million visitors a year, and that’s just on Saturdays and Sundays when the sun is still up.  When they first opened, they described themselves as the Disneyland of Flea Markets.  They are known for being big, clean, exciting, and full of great finds.  A survey in 2019 found that 52% of Americans had visited a flea market that year.  This means that Trader Village has a very wide customer base, but their key demographic consists of lower income individuals and families as well as other value-oriented individuals.  The visitors to Traders Village have thousands of different stalls to browse through, and Tim says that you can “buy anything from a ballpoint pen to a bulldozer.”

The other huge demographic of Traders Village is its self-motivated, entrepreneurial dealers, or the people that rent space to sell their goods.  Tim says that some of the dealers have been in constant attendance for over 45 years.  He spoke fondly of how he enjoys being an incubator for small businesses.  He even shared that some businesses start at the flea market before expanding to be incredibly successful chains, such as an electronics store and a furniture outlet.  However, he did say that not all of the thousands of new businesses started each year make it, but he still enjoys watching many go on to be successful.

Tim also discussed his leadership style.  His preference is to surround himself with the best possible team and empower those team members to be autonomous and successful.  He puts a lot of faith in his employees, but that has always worked well for him.  He enjoys giving his managers the freedom to run their aspect of the business in their own way.  In addition, he is very welcoming of new ideas and said that he is willing to try almost anything at least once.  Tim admitted that new ideas can be scary but still enjoys exploring them.  However, he also helps guide people to evaluate their own suggestions by helping them think through how it would be operationalized.  By doing this, he enables his team to filter out some of the ideas least likely to succeed before they actually are tried, which often works better than him pointing out the flaws from the start.  Furthermore, he likes it when his team makes decisions because Tim believes that even a wrong decision is sometimes more likely to move things along than choosing not to make a decision at all.  Tim emphasized the importance of being able to adapt and stay ahead of challenges.  Lastly, Tim always tries to exceed the expectations of his customers and his dealers.

The Grand Prairie location is currently installing a roller coaster to its rides area.  Tim discussed that adding bigger and better rides helps to bring a new, wider demographic to the flea markets.  Additionally, the rides area can be marketed separately from the flea market and even open when the shops are closed, giving Traders Village another income stream besides renting spaces for dealers to sell.  Tim talked about his experience of installing the Boardwalk Bullet roller coaster at Kemah Boardwalk.  He said that adding a coaster really changes the perception of a place and takes it to a whole new level.  At Kemah, adding the coaster tripled sales and brought it far more visitors compared to before the coaster was open.  Tim hopes to see similar positive impacts when the former Scandia Screamer opens at Traders Village.