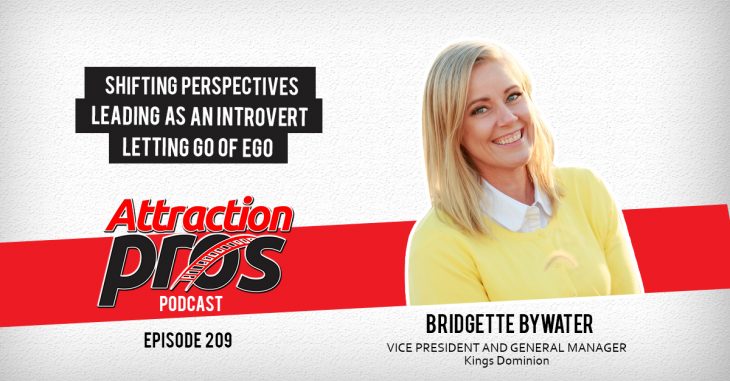 Bridgette Bywater is the Vice President and General Manager of Kings Dominion.  Bridgette was inspired to join the attractions industry from hearing the fond memories her parents had working at Worlds of Fun when they were younger.  Despite being an introvert, Bridgette decided to try being a ride attendant, like her parents, and she found that working with people was very motivating for her.  She chose to stay with Cedar Fair in various leadership roles, where she was able to work with many different people and help them be successful in their various endeavors.

Bridgette grew up hearing stories about how her parents met at Worlds of Fun during its first year of operation.  Her father ran the Zambezi Zinger while her mother ran the Silly Serpent nearby.  In addition to those stories, Bridgette has her own fond memories of her early visits to theme parks, including riding Bounce-A-Roos over and over until Worlds of Fun closed for the day.  Though she initially started as a chemistry major while in college, her continued time working in theme parks during the summers helped Bridgette realize that theme parks was where she wanted to stay.  Over the years, Bridgette has held many jobs at Cedar Fair parks and its corporate headquarters.  She started running rides like her parents, then spent time in a variety of divisions: admissions, human resources, safety, security, and operations (1park and water park).  Now, she is the VP and GM of Kings Dominion.

Bridgette describes herself as an introvert, and that contributes to her leadership style.  Bridgette believes there are two main leadership styles:  those who lead from the front of the room and those who lead from the back of the room.  While she is definitely capable of getting in front of a room when she needs to, Bridgette says that she tends to lead from the back of the room by supporting her teammates, removing obstacles for them, and helping her employees be the best they can be.  Bridgette says that the best leadership teams are made up of a combination of introverts and extraverts and that neither is inherently better than the other.

Bridgette emphasized that a leader’s job is to focus on their team and elevate them.  Leaders provide their teams with the knowledge, tools, and information they need to succeed while working to eliminate any obstacles that stand in the way of them performing at their best.  By doing this, the team will return the favor and elevate the leader.  Another important aspect is empowering members of the team to take action and make their own decisions.  For example, frontline employees need to feel empowered to take action to solve guest problems quickly and sincerely without having to get approval from their managers.  Even if an action was taken that might not have been the manager’s first choice, it is still important for that manager to support that their employee took the action they thought was necessary and guide the employee toward the best decision next time.  Bridgette also emphasized the value of delegating tasks in order to eliminate single points of failure.  By making sure multiple people are aware of a task that needs to get done, it is more likely it will get done if one person is unavailable.  Bridgette talked about how it is important for your team to be able to function even if you are not there.  That means they have been set up for success and simply need to execute in the best ways they can.

When she first arrived at Kings Dominion to assume her current role, Bridgette brought years of varied experiences with her, making her an incredibly well-rounded Cedar Fair leader.  She admits that she wouldn’t call herself the expert in any single discipline but instead knows how to assemble teams of experts and enable their success.  In the early days of her new role, Bridgette asked lots of questions and learned as much as she possibly could from those around her.  In addition to learning, the fact that she asked questions helped to challenge others to evaluate why they did things a particular way instead of just taking what had always been done as the only possible option.  Bridgette’s experience across so many different parks helped her see the overarching goals of Cedar Fair parks, such as making every guest happy, while also respecting each park’s rich history and individuality.  Additionally, spending time in the corporate offices offered yet another look at the parks.  Bridgette said that one of the best parts about taking new jobs is that they often give you a different perspective, which can lead to greater overall understanding.

Bridgette discussed some of the changes that have taken place because of the pandemic and offered her thoughts on which ones are likely to stick around.  She discussed that almost every change, especially those that are likely to stay, were discussed prior to the pandemic’s onset and were simply accelerated because of it.  Many of the changes were implemented to eliminate unnecessary touch points for both guests and employees.  This led to changes including cashless transactions, more virtual communication with guests, online training, virtual queues, and digital checklists for maintenance teams.  Many of these digital changes led to increased efficiency and are likely to continue far into the future, but embracing technology isn’t meant to completely eliminate face-to-face interactions.  In-person interactions are still cherished, especially at places like theme parks where so many memories are made for friends and families.