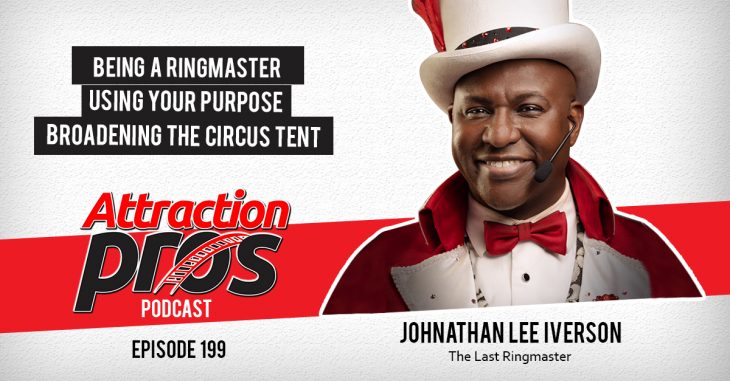 Johnathan Lee Iverson has the humbling title of The Last Ringmaster.  For almost twenty years, Johnathan was the ringmaster for Ringling Bros. and Barnum & Bailey Circus, also known as The Greatest Show on Earth.  He earned the title of The Last Ringmaster because he held that role when the circus gave its last performance in 2017 before shutting down.  Johnathan says that title may have an asterisk behind it now that there are rumors that the Ringling Bros. Circus may be returning someday.

When he was just eleven years old, Johnathan joined the world-renowned Boys Choir of Harlem and was introduced to the world of music.  Beyond growing as a musician, Johnathan learned many lessons during his years with the Boys Choir of Harlem.  Those lessons included learning how to accept failure, how to utilize your specific skills and tools, how to build meaningful relationships, and how to work hard for something you really want.  All of these skills are incredibly transferrable and have been vital throughout his life, including his time as a ringmaster.  Johnathan would go on to study music at LaGuardia High School of Music & Art and Performing Arts and then the Hartt School of Music at the University of Hartford.  Johnathan was on track to move to Europe and become an opera singer when he happened to run into the director of the Ringling Bros. Circus one day.  They were looking for a singing ringmaster, and though he was initially skeptical of the idea of making a career out of being a ringmaster, Johnathan auditioned for the role against thirty other candidates.  Upon earning the job, Johnathan became the Ringling’s first ringmaster from New York, its youngest ringmaster, and its first Black American ringmaster.  Johnathan’s story and talent quickly made him famous and helped Ringling Bros. Circus break records, but his gift resonated with individual members of his audiences in ways that couldn’t be measured by ticket sales or attendance numbers.

Johnathan stated that the role of a performing artist shouldn’t be for yourself but should instead inspire others and push the standard of your craft higher.  Johnathan shared some of the many stories about the children whose lives he touched during his time as Ringling’s ringmaster.  One child who heard his words chose to become a speaker.  Another girl who had been shy before was inspired by Johnathan through a short interaction to become a performing artist.  A mother shared that her autistic son spoke his first words at the circus and now loved their yearly trips to watch the performance.  Johnathan says that he will likely never know the extent of the people that he and the rest of his circus coworkers had an effect on, but he knows that his voice, his words, and his gift continue to make a lasting impact.

For several years, Johnathan teamed up with fellow circus performer, Paulo dos Santos, to visit schools and talk about bullying.  Paulo is a little person.  Upon meeting each other, Johnathan admits he had to reassess his personal bias about Paulo.  For example, Johnathan says that Paulo can pick him up and do squats as if Johnathan weighs nothing.  In addition to being incredibly strong physically, Paulo is strong mentally and emotionally.  As Johnathan put it, most people outgrow or can change the thing that they are bullied for, but that isn’t the case for Paulo.  He uses this and what he has learned over the years to inspire kids to think twice about bullying others and to help those who are currently on the receiving end of bullying to realize that they can be strong and successful like Paulo.

One thing that Johnathan loved about the Ringling Bros. and Barnum & Bailey Circus was that it showcased the talent of such a diverse group of people.  The performers came from different countries, spoke different languages, and showcased elements of their different cultures.  This broad array of people came together to celebrate their wonderful differences but also find some commonality between them.  Many people that visit the circus get to see talents and sights that they may never experience otherwise.  Some examples of this are the talented animal actors.  Johnathan said that one thing you can really see in the shows is that the different animals are all unique and have their own personalities.

Additionally, Johnathan is the ringmaster for Omnium:  A Bold New Circus, which recently launched a virtual circus experience but hopes to launch an in-person component in the future.  Omnium aims to “broaden the tent” and features “uniquely unified, multi-talented, multi-racial, and multi-abled performers” in a celebration of diversity and inclusion.  One star of this new circus is Jen Bricker-Bauer, an aerialist who was born without legs.  During the virtual show, she shares the fact that she grew up in a household where she wasn’t allowed to say she can’t do something because her family knew that wasn’t true.  Johnathan describes her and their fellow Omnium performers as a celebration of the “depth and breadth of the human family.”  They also aim to make circus tickets available to people that may not be able to afford them or might not be able to attend the circus for other reasons. Omnium also tries to eliminate as many accessibility barriers as possible by offering integrated American sign language interpreters, audio description of the entire show, reduced sensory seating areas, and other personalized accommodations.  Johnathan hopes this celebration of commonality and ability to come together despite differences can seep into more of our society and help make the world a better place.

If you’d like to learn more about Omnium:  A Bold New Circus or watch their virtual performance, visit their website.  If you’d like to connect with Johnathan, you can contact him at his website or by the handle @lastringmaster on almost all social media platforms.

One thought on “Episode 199 – Johnathan Lee Iverson talks about being a Ringmaster, using your purpose, and broadening the circus tent”