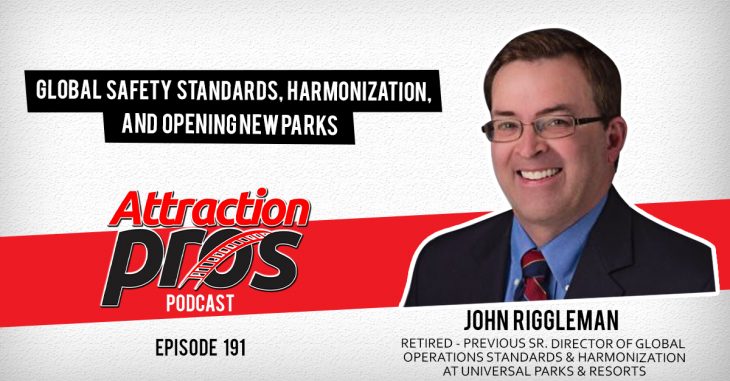 John Riggleman retired in 2020 after a career of over 40 years in the themed entertainment industry.  He started as a ride operator at Cedar Point and Busch Gardens Williamsburg back in the 1970s.  Over the years, he has opened multiple new parks and dozens of new attractions and acted as an expert in theme park operations.  Most recently, he was Senior Director of Global Operations, Standards, and Harmonization at Universal Parks & Resorts.  Even after retiring, John is still very involved with the industry, helping to lead safety committees, educational initiatives, and acting as a mentor for many young professionals in the attractions industry.

John started out as a chemistry major in the pre-medical track at West Virginia University.  During the summers of his college years, he worked two summers at Cedar Point and two summers at Busch Gardens Williamsburg.  Though he started out as a ride operator, he was given more responsibility each year, soon gaining leadership positions despite his young age.  John realized from those frontline operations experiences that he wanted to have a career in themed entertainment because he loved working outdoors and truly enjoyed interacting with people.  Getting hired full-time after graduation was actually a challenge for John in the 1970s, so he stayed in school and earned a second degree in medical technology as he continued to submit different applications to different parks.  Eventually, he found his landing spot in 1980 at Cedar Point as an area manager.  After finding his way into the industry full-time, John would stay for 40 more years, work at about 10 different parks, live in 9 states, open 4 new parks, and open over 40 new attractions.

While they do have a variety of similarities, John noticed some key differences between seasonal and year-round theme parks during his time working at each type.  One challenge for seasonal parks is that they often have smaller teams that must wear more hats.  Year-round parks tended to have larger, more specialized teams.  This led to a difference in how quickly employees, especially young workers, were able to climb the ranks and gather more responsibilities.  Like John experienced himself, young employees at seasonal parks that returned each year and excelled were given new role with more duties and oversight of other employees.  At a year-round park, this sort of quick progression is less common.  At either type of park, whether the employee ultimately wants to be in a guest-facing role later in their career, John sees the value of all theme park employees spending some time on the frontlines.  For example, back-of-the-house operations employees can often design better service, training, and operations manuals if they have empathy for what ride operators experience each day.

Day-to-day operations have their unique challenges, but opening new rides, lands, or parks is incredibly challenging and rewarding.  When a new park is part of an existing chain of theme parks, such as Six Flags or Universal, the new park has the luxury to learn from the existing parks and take many of their operations procedures to the new park.  While this makes it easier for the new park, it also is beneficial to the company because consistency across parks in your portfolio is very beneficial.  When creating a park that is completely new, they can start their operations manuals from scratch.  This was the case that John experienced when he was on the opening team for the short-lived Hard Rock Park.  They first benchmarked existing parks and looked at what worked well as well as identified opportunities for improvement.  Hard Rock Park had the opportunity to run completely differently than parks with decades of history.  John enjoyed the ability to incorporate new efficiencies in the park’s operations plans, but unfortunately, the park didn’t even last for an entire season.

When asked about Hard Rock Park and some insight into possible reasons why it didn’t survive, John indicated that there were multiple factors at play.  He said it was a beautiful park with a great variety of attractions, delicious food, and IAAPA award-nominated entertainment.  All of the guest-facing elements looked great, and John was confident that the right people were designing and building the park.  Some of the different theories are that the hard-hit 2008 economy was partially to blame.  Another theory is that the park was expected to be cash flow positive from day one, which is a feat very few parks can achieve.  Most parks take several years before they climb out of the red, and their parent companies have to shoulder some losses to ultimately make the park a success.  Another possibility is that the location, about 10 minutes from the beaches of Myrtle Beach, didn’t help; some thought it was hard to argue with the free entertainment of a beach.  In the end, it is hard to pinpoint a single reason that Hard Rock Park didn’t make it through its inaugural season.

John also discussed his involvement with education, training, and informal mentoring of young professionals in the attractions industry.  John has taught several classes at the Rosen College of Hospitality Management, including risk management and product development courses.  John also serves on multiple boards and committees that focus on training and increasing safety standards within the themed entertainment industry.  While theme parks are often direct competitors with each other, when it comes to safety, John says that these competitors become “fierce friends.”  John enjoys recruiting students from universities near the theme parks.  He emphasized that he loves learning from all of his employees and enjoys hiring talent that will challenge him and help make the park even better.  When asked if he had any advice he’d like to share with students or other young professionals potentially interested in a career in theme parks, John emphasized the importance of finding your passion, whatever that might be.  He also discussed the value of networking.  Some examples of places to network would be to attend ASTM, AIMS, and IAAPA expos and conferences.  He also suggested getting involved with theme park competitions.  John has been a long-time supporter of the Ryerson Invitational Thrill Design Competition, started by Dr. Kathryn Woodcock, a professor at Ryerson University.  Additionally, John said that while a degree is useful at opening some doors, your attitude is what is most important at ultimately proving yourself as a young professional in the themed entertainment industry.

If you’d like to get in touch with John Riggleman, reach out to him on LinkedIn.

"I'm the type of person who like to roll up his sleeves and know what's going on."

"Having fun and making memories is what this industry is all about."

Absolute joy working with this team on this podcast opportunity. Listen if you want some awesome career insights and thoughts from @IAAPAHQ’s fearless leader! https://twitter.com/AttractionPros/status/1541768596547829762