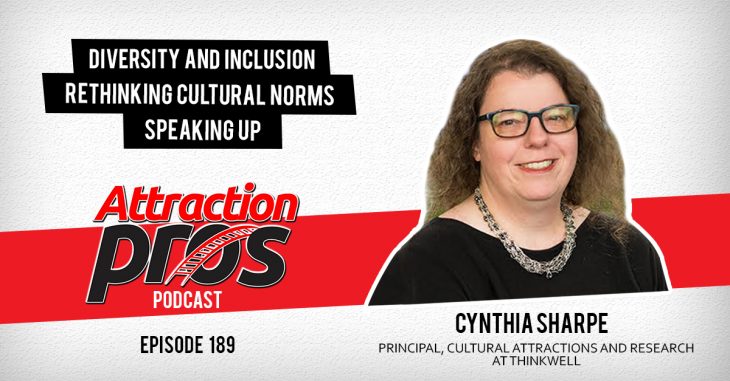 Cynthia Sharpe is a self-proclaimed flipper of tables and setter of fires, according to her Twitter handle.  She hasn’t come across a challenging topic, especially ones related to diversity, equity, and inclusion (DEI), that she hasn’t been willing to tackle, discuss, learn about, or educate others about.

Cynthia began her themed entertainment journey at the Museum of Science in Industry in Chicago.  Over the course of seven years, she had seven different roles ranging from a focus on traveling exhibits to developing permanent installations.  When asked about the experience, she said it was an amazing opportunity to learn the ins and outs of the museum side of the themed entertainment world, including both the good and not-so-good aspects.  While museums have the ability to educate people on challenging topics or events they may not have gotten a chance to learn deeply about, museums can also do harm by perpetuating harmful stereotypes, showing a one-sided view of an event or argument, or furthering the agenda of those who paid for the exhibit.  Cynthia discussed the importance of being very aware of those pitfalls and not being afraid to tackle them head-on, often unintentionally.  She went on to say that museum exhibit creators choose what stories to tell and what faces to show in their exhibits, and those choices have a huge impact on whether the often marginalized groups that Cynthia and others aim to serve feel heard and welcome in the museum’s halls.

Cynthia has been in her current professional role as the Principal of Cultural Attractions and Research at Thinkwell Group for 16 years.  At Thinkwell, she wears many hats, ranging from acting as an executive creative director for museums, aquariums, large-scale cultural events, theme parks, and other themed entertainment venues to being an executive liaison for Thinkwell’s Diversity and Inclusion (D&I) Council.  When asked further about her role, Cynthia explained that she uses her privilege as a “47-year-old white woman with an executive title” to tackle issues that her junior or more marginalized colleagues might not safely be able to discuss.

When asked what her strategy is for addressing folks in a room who have either intentionally or otherwise been pushing tough topics under the rug or need a wakeup call on an idea that is being discussed, Cynthia shared her approach as the final speaker at the 2019 Themed Entertainment Association (TEA) Story + Architecture + Technology = Experience (SATE) Conference, where the entire two days focused on DEI.  Cynthia took the stage and, after introducing herself, stated, “I’m racist.  I’m sexist.  I have bias.”  By doing this, as a keynote speaker at a conference focused on tackling this bias, she admitted her faults and vulnerabilities, an act that invites those in the audience to do the same.  Cynthia went on to say that she, and the rest of us, grew up soaking in media that portrayed people in damaging ways.  She went on to cite specific failures of her own early exhibit designs to show that it is important to learn from past mistakes in order to avoid the same negligence in future projects.  Most people don’t want to think about how their past work may have hurt someone, but there are valuable lessons to learn from reflecting on past poor choices.

When asked what themed entertainment’s role is in current DEI and social justice movements, Cynthia said that the industry has a huge part to play because of its power of storytelling.  The types of stories that are told, the voices that are being elevated, and the identities being portrayed are incredibly important, and the attractions industry has a responsibility to use its storytelling abilities to enact positive change.  For example, when working on a themed land inspired by a certain country or culture, it is important to be respectful in your authentic portrayal, not appropriative.

It is important to understand the subject matter that you wish to take inspiration from, and it is helpful to have knowledgeable voices at the table from the earliest discussions.  Cynthia emphasized the value of having community members from the area you’d like to portray involved from the very beginning to give guidance and act as a source of immense knowledge.  Cynthia emphasized that once a creative team decides upon and understands which authentic story they’d like to tell, the rest of the decisions flow a lot more naturally and in a way that is respectful and truthful to the subject matter.  Furthermore, having a more diverse and inclusive team from the very start is incredibly beneficial to creating attractions and experiences that make everyone feel welcome and seen.  Cynthia emphasized that when a child can see themselves and their culture or identity reflected positively in one of these exhibits or rides or shows, then that child will be empowered to go do great things in the future.

Cynthia also cofounded Harriet B’s Daughters with Nicola Rossini in 2017.  Their mission is to change the face of themed entertainment one person at a time.  They provide 1-on-1 mentoring and guidance to their members with the goal of creating a more inclusive attractions industry.  You can learn more at harrietbdaughters.org.