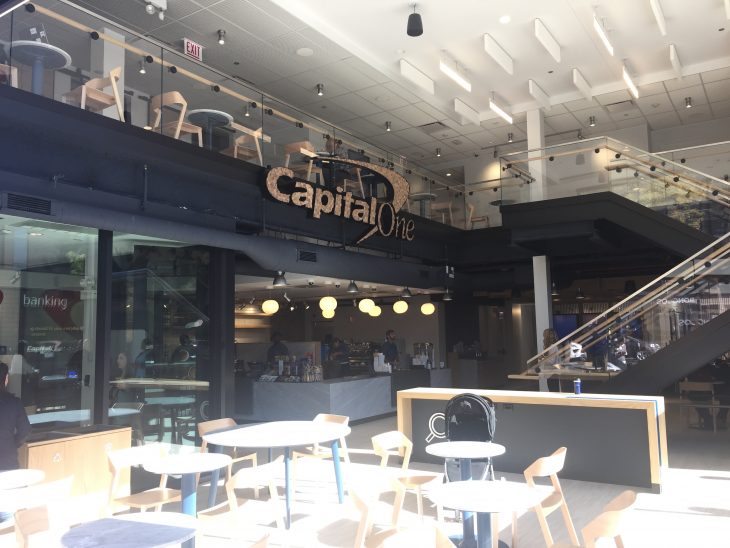 A new Capital One branch just opened right down the street from me.  Normally this wouldn’t be very exciting.  In fact, the entire time it was under construction, I’d walk past and think that the bank was opening in a spot that would be perfect for a new restaurant, bar, or café.  Why would they open a boring bank here?

Today I walked by and saw that they were celebrating their grand opening.  A few representatives were positioned outside, and a friendly associate greeted me when I walked up.  I hadn’t seen the inside of the building yet, as it had been blocked until this morning, but now I was able to see that this was not a traditional branch.  In fact, it wasn’t even a bank.  It was a Capital One Café.  The walls were floor-to-ceiling windows, and they were retractable.  In fact, they got lucky on their opening day as the weather was perfect, so the walls were fully retracted, creating an open-air environment.

The associate that greeted me extended a coupon for a complimentary coffee.  Now, I’m used to walking into the bank and seeing an old coffee maker in the corner, with Styrofoam cups that don’t add too much to the coffee (or banking) experience.  But in this case, I looked inside, where I expected to see a row of tellers, but instead it was a full Peet’s Coffee location.  I accepted the coupon, and upon looking inside I asked, “Where’s the bank?”  She then offered me a tour.

We walked into the seating area, which not only was refreshing because the walls were retracted, but natural light shined in through the glass ceiling as well.  My first question once inside was confirming that Wi-Fi was available, which she affirmed, and then showed me multiple stations for charging laptops and phones.  Cool, I could actually sit here and get some work done.  I looked toward the second-floor balcony and said, “So the tellers are upstairs, right?”  She then offered to show me the second floor, which had more stations, more charging stations, and even meeting rooms that were available on a first-come, first-serve basis… but zero bank tellers.

I felt the way that most people probably felt the first time they walked into an Apple store.  Where are the cash registers?  Where do I get in line?  Why is someone greeting me right away?  I had similar questions – I saw that there was an ATM available, but what about regular banking needs?  She told me that the associates visit the guests while they’re sitting in the café area; there are no tellers, no lines, and certainly no stale coffee while you’re waiting.  They’ve taken the Apple Store experience, combined it with their own banking services, and identified that consumer trends are changing – people don’t need traditional banks anymore.

Let’s bring this back to the attractions industry.  Who are you benchmarking against?  Is it similar types of attractions?  If so, there is a finite amount of ideas that you’re going to generate.   Expand your search.  Go to an Apple Store.  Test drive a luxury sports car.  Walk into a real estate office pretending to buy a new home.  Think about how your drink is made and delivered to you at Starbucks.  Ask yourself, what are these industries doing that I’m not, that could enhance the guest experience?  Better yet, what can I do better?