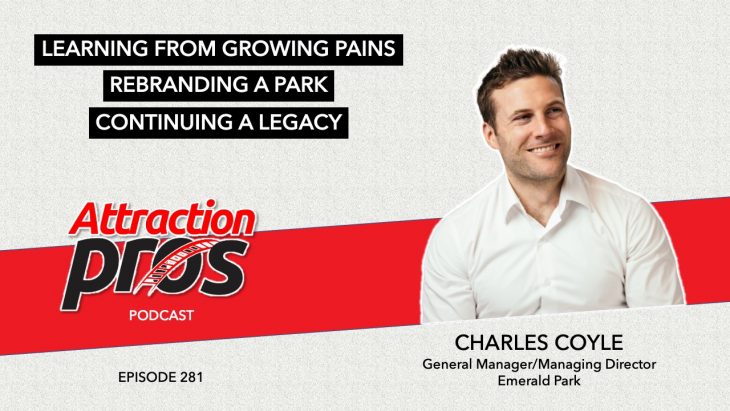 Charles Coyle is General Manager and Managing Director of Emerald Park, Ireland’s only theme park & zoo.  If you have never heard of Emerald Park, don’t feel bad, the park has operated since 2010 as Tayto Park, but in March of 2023 will reopen as the rebranded Emerald Park. The new name reflects the spirit of Ireland and harkens back to the country’s nickname, the Emerald Isle. In this fascinating episode, Charles talks about rebranding a park, learning from growing pains and continuing a legacy.

“If we were to ever change the name of the park, now is the time to do it.”

Charles and his team reached a critical juncture where expansion of the park was imminent and marketing the current name and identity was not lucrative for reaching outside of mainland Ireland. They felt if they didn’t do it now, there would be no turning back.

Rebranding a park is no small task. Picking a name is tough enough, but then you have to think about every place the old logo, name or likeness was placed so it can be changed. Charles says that right now the marketing team is working really hard to ensure that all of the old logos and insignia are changed out before opening. Charles has a realistic view saying it’s likely they will miss something along the way, but that’s okay.

“You learn more from your failures than you do from your successes.”

In 2015, the park had an amazing year… sort of. Attendance was up, spending was up, profits were up. Unfortunately, so were guest complaints. Because they were not ready for the influx of guests that year, they disappointed many of them and the park saw a pretty significant dip in attendance the following year.

To overcome this, Charles said they had to not just say to their guests, “Hey, we’re better now”, they also had to invest in infrastructure and facilities so they could accommodate more guests. This meant not just adding attractions, but also looking at bathrooms and how the crowds would be managed. Ultimately it took about 3 years to win back the trust from the guests.

“As I was able to learn and grow, the park grew as well.”

Charles literally grew up at the park working alongside his Dad, Raymond. Raymond was the visionary that created Tayto Park and built it up to the destination it is. Unfortunately, Raymond passed away before the rebranding was complete, but Charles will tell you that his Dad’s fingerprint is on every inch of that park.

Charles now has big shoes to fill as he carries on his Dad’s legacy. He seems up to the task, never forgetting the lessons he has learned as he and the park grew up together.