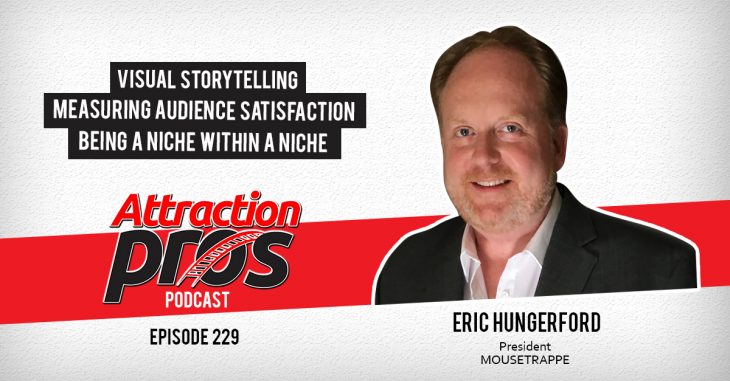 Eric Hungerford is the President of Mousetrappe, an award-winning media design and production studio that creates and develops inspired ideas into unforgettable cinematic experiences. Their work is featured in shows, spectaculars, immersive films, exhibits, attractions, and live events for the most treasured theme parks, museums, events, and IPs in the world. A movie buff at a young age, Eric knew his career would revolve around this type of media. In this episode, Eric discusses visual storytelling, measuring audience satisfaction and being a niche within a niche.

“There is something very quantum about what we do. It doesn’t really exist until it’s viewed.”

Henry David Thoreau said, “It’s not what you look at that matters, it’s what you see”.  Eric and the team at Mousetrappe take this quote to heart when thinking about how to convey a story or elicit an emotion with a park visitor. Whether it’s a projection on a castle or guiding someone through a queue experience, the development process is the same.

Eric discusses getting new eyes on Mousetrappe’s productions prior to launch to ensure that the story is understandable and that the key emotions are being felt at the right time. He says it can be hard to imagine watching something for the first time after you have worked on it for weeks and months.

Eric is, of course, ultimately concerned with what the audience is going to think because ultimately that’s who you are trying to please. A client may have a certain idea, or a piece of technology may be really cool, but its usefulness has to be vetted against how well it helps give the audience the desired experience.

When asked about specific ways to measure the success of a show, Eric points to the audience survey of those who have experienced the show or event. Eric puts little stock into the social media posts, both good and bad, from those who may just have a big following or are looking for clicks. Eric is much more comfortable watching the faces of the people watching the show and judging its impact by their visceral reaction.

Being a niche within a niche

“Everything we do is a little different every time so it keeps people engaged.”

Mousetrappe is a media production company that focuses solely on location-based entertainment, which means they do not do film or television work. Everything they do is viewed in a space such as a theme park or event location.

Eric says this allows his team to focus on the best methods to deliver the content for the audience. Lead times can be up to 2 years so deciding on the technology to be used on a particular project really needs to be focused on the best way to make the tech invisible to tell the best story, not highlight what the fancy tech can do.

In @AttractionPros vernacular, this is called a “banter” episode. No idea if that is official podcast lingo, but it’s what we call it when it’s just Josh and I babbling about. Pretty darn excited about this topic though! https://twitter.com/joshua_liebman/status/1526570369263587329

Inspired by many recent interviews we've conducted, @MattHellerPOC and I dive deep into TRANSFORMATION... specifically as it relates to both guest and employee experience, and challenges facing the industry today. https://twitter.com/AttractionPros/status/1526548246994341890

"It's a family atmosphere. Nothing beats it."

"The business model has always been value, and it works."

"We're simple people who go to work every day, and we love what we do."