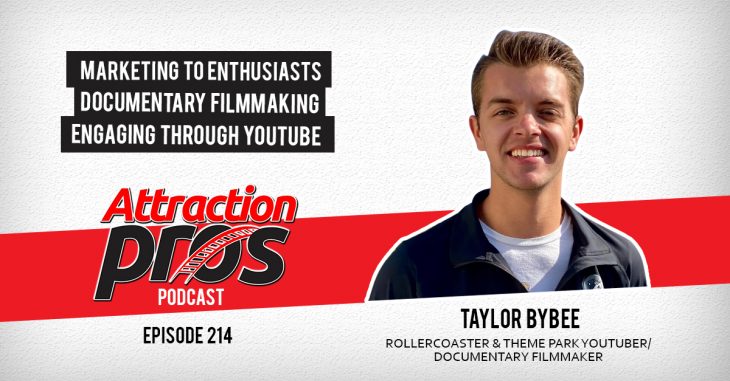 Taylor Bybee is a digital cinema graduate with a passion for the amusement industry.  In 2013, he created Coaster Studios, a YouTube channel geared toward coaster and thrill ride enthusiasts.  Taylor considers Coaster Studios as a bit of a “variety channel,” with footage on rides, reviews, satirical content, and documentaries.  Most recently, Coaster Studios has released a full length documentary, This is How We Roll, which highlights the inspiring story of Rocky Mountain Construction.

Holiday World in Santa Claus, Indiana offers a tour of The Voyage, one of the park’s signature rides, that they offer as a premium experience, catered specifically to enthusiasts.  However, coaster enthusiasts make up such a small percentage of overall park attendance.  With that said, Taylor says that coaster enthusiasts are both your biggest fans and your biggest critics.  Coaster enthusiasts are the loudest, and act as the park’s advocates to influence new guests.  When you have such a passionate group of enthusiasts, what they love is often going to transfer over to the public.  For example, Rocky Mountain Construction sells merchandise, which is unusual from an industry supplier; however, RMC’s fans are as big of fans as the parks themselves, and are eager to support their favorite ride manufacturer.  As a result, their influence has the ability to convert the average visitor into season passholders and breed the next wave of enthusiasts.

“Roller coasters are the B storyline.  The A storyline is about the people.  You get to know these people, and you become attached to them by the end.”

As a recent graduate of Utah Valley University, Taylor was required to complete a senior capstone project for the digital cinema department.  Having previously met members of the Rocky Mountain Construction team, he presented the suggestion of creating a documentary, which was immediately well received.  In addition to the rides, Rocky Mountain Construction has an inspiring story with incredible people behind it.  What was initially set out to be a 40 minute film, Taylor quickly identified that there was a much bigger story to tell, due to what he learned after starting production that couldn’t be researched online.

Taylor also stresses that This is How We Roll is not intended to be a commercial, but to give people a greater appreciation for roller coasters.  You can ride an RMC ride all day, but when you know the backstory of the people behind it, you ride it with a greater understanding of everything that went into it.  The documentary is intentionally designed for anyone who wants to learn more about roller coasters, not just the biggest coaster fans.  This is How We Roll is a story about family, determination, and perseverance, and Taylor believes that that is what appeals to the majority of people.

“You can have the nicest camera in the world, but at the end of the day, if what is on the other side of that camera doesn’t look amazing, there’s not really a way to hide that.”

When a park posts a video, it’s advertising.  However, when Coaster Studios produces content, the intention is to engage the audience, rather than striving for the audience to purchase a ticket.  Since 2013, Coaster Studios has built trust within the audience, proving that the content will be authentic, as well as produced with high quality.  And since not every visit to a theme park will be a perfect experience, Coaster Studios shares that too, and the audience can make their decision to visit the park or not, versus the channels that parks use, which will always highlight the high points of the experience.  If the content always said that a ride was the ultimate experience, it would lose the authenticity that has built trust in the channel and the brand.

PS: Taylor has ridden 780 roller coasters all over the world.  When asked what he hasn’t ridden yet, he says that he has yet to ride Formula Rossa at Ferrari World in Abu Dhabi, the world’s fastest coaster.