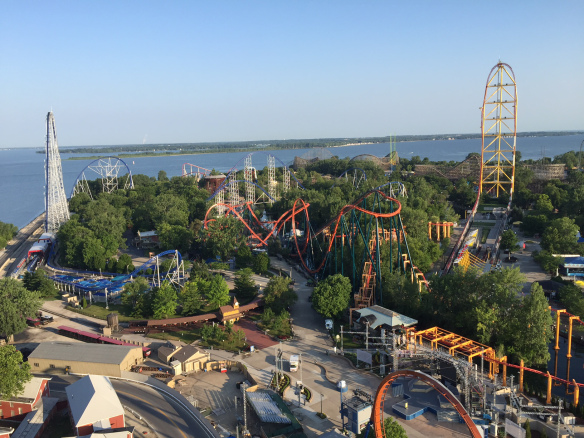 When my friends and I on the #CNC16 trip visited Cedar Point a few weeks ago, we got up bright and early to experience the Sunrise Thrills VIP Tour.  Not only did we get to see the park from the top of Valravn, we also got incredible coaster-nerd access to Top Thrill Dragster, Millennium Force and Maverick.

If you are at all interested in a bird’s eye view of an amazing park, or just want to geek out on some incredible roller coasters, this tour is for you.  However, this post is not about the tour specifically.

Our tour guides were two Guest Services associates who were also roommates.  One was a front line associate (Steve), the other was a Supervisor (Jeff).  We learned that after the tour concluded, Jeff was going to be working at the Iron Dragon roller coaster, helping guests fill out forms to be part of a Virtual Reality beta test.  Jeff shared with us that a lot of people want to do this, so it’s an intense, go-go-go, seemingly endless kind of process. Combine that with the expected heat, and Jeff wasn’t exactly looking forward to it.

Since many hands make lighter work, Jeff was trying to enlist Steve’s help.  His convincing argument was a statement I’ll never forget.

“Come sweat with me”, he said.

To me, this acknowledges that while the assignment might not be the most desirable, it’ll be a lot better doing it together than alone.  It also indicates that Jeff will be there WITH Steve, and he’s not just telling him to go do something without supporting him.

And while I don’t know the history between these two, I think it also indicated that Jeff would do the same for Steve if the situation were reversed.

At its core, these four words communicate the one thing employees need more than anything from their leaders… support.

We all know that actions speak louder than words, so the act of going through the same hardship as an employee speaks volumes about your understanding of their struggles. (And no, they don’t care that you used to do their job back in the day.  They want to see you do it TODAY!) When they see that you ‘get it’, it’s much easier for them to trust you, believe in you and want to follow you.

If you haven’t been out to work with your staff in a little while, I encourage you to find the time to do so – even if you don’t HAVE to.  If your season is winding down, you know that you need the remaining employees to pour on the afterburners to finish out the season strong.

Your display of “sweat equity” could be just what’s needed to ignite the flame.