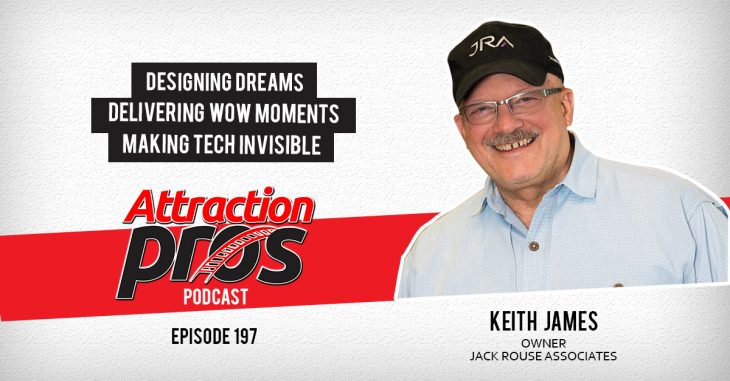 Become a Google Things To Do Beta Tester!

In March, news leaked out that Google would be launching a new program for activities and experiences operators called Google Things To Do. Redeam is a Google Things To Do launch partner, with a unique opportunity to bring a few qualified, early adopter operators into the beta test.

Interested in learning more about joining the Things To Do beta test?
EMAIL SALES@REDEAM TODAY!

Keith James is a Partner, an Owner, and CEO of Jack Rouse Associates (JRA), a design and production company of just over forty employees located in Cincinnati, Ohio.  JRA was founded in 1987, and Keith joined in 1992.  JRA provides its design and project management expertise to a wide range of clients both within and external to the attractions industry.  Their clients range from domestic and international amusement parks, museums, and other themed entertainment offerings to corporate entities looking to tell a compelling story about their brand.

Keith began his nearly fifty years in the themed entertainment industry with a summer job at Kings Island.  At the time, Keith was a student at the University of Cincinnati, studying theater and stagecraft.  He needed a summer job in order to pay his tuition, so he became a stage manager at Kings Island.  What was especially exciting about his first venture into the attractions industry is that he was working at Kings Island during its opening season.  Looking back on that summer, Keith had no idea that such a successful career in the themed entertainment industry would follow.  At the time, he was just having a great time with 3000 other employees his age.  Some of those coworkers would go on to be lifelong friends and even business partners.  One of the performers in the theater would later become Keith’s wife!  After that summer, Keith stayed for 17 years with Kings Island and Cedar Fair.  Subsequent jobs would take him and his family to Toronto, Vancouver, and Australia.  Then, Keith returned to the United States and moved to Orlando to help open Universal Orlando Resort.  After several years with Universal, Keith was hired by JRA in 1992.  Since then, he’s worked on countless themed entertainment projects around the world, but according to Keith, he has “never worked a day in his life.”

When asked about how JRA approaches different types of experiences, Keith said every project starts with the same thing: a story.  A company or client will come to JRA with their vision of a future attraction or experience, and JRA’s goal is to enable that vision as closely as possible.  JRA helps the client fully define the story they’d like to convey and the emotions that they’d like their guests to feel.  They also carefully define the target audience.  For example, a science museum might be tailored for older students while a theme park might want to keep every member of a family involved.  After these core details are established, the JRA team dives deeper into how to make the vision a reality.  For example, every client will have a timeline and budget, and these constraints help decide what opportunities are still possibilities.  In some cases, the limiting factor is the technology available within these constraints.

When discussing the role of technology within attractions and their development, Keith emphasized the importance of using technology to enhance, support, or convey the story.  Unlike the Wizard of Oz, we want to keep the technology hidden and out of mind so that the magic and immersion of the experience take center stage.  Keith learned this valuable lesson as a college theater student when someone told him that the goal of a stage crew is for the audience to leave talking about the show and the story, not the set pieces, costumes, or special effects.  All of those things are important and key to conveying the story properly, but it is ideal for the guest to be so immersed in the story that they don’t separate those details from what they just experienced.  Ultimately, JRA’s mission is “designing dreams and delivering wow moments.”  One example of a wow moment that Keith provided is the first time a parent watches their child hug Mickey Mouse.  During that moment, you don’t want that parent or their child focused on the technology used to make Mickey blink or speak.  Instead, you want them completely focused on that magic moment, which will become a precious memory and stick with the family for years.

Additionally, Keith talked about how JRA helps corporations create customer-focused experiences and storytelling moments that help customers “live that company’s brand.”  While there is a fine line between something being overtly commercial or creating an exciting experience based on a particular brand, Keith emphasized the value of creating positive memories that are associated with a particular brand.  Furthermore, Keith discussed how the line between the themed entertainment industry and other industries is becoming increasingly blurred.  He even referenced a paper called “What do we do when the whole world is themed?”  People are expecting more and more positive and elaborate experiences, even with things that used to be traditional, boring purchases.  Nowadays, companies often have to think about the unboxing experience or the social aspects of their product instead of simply focusing on the product itself.  It has created many opportunities to utilize skills from the themed entertainment industry in other sectors.  However, the exchange of skills, information, and technology goes the other way as well.  The themed entertainment industry constantly brings new technology and techniques from other industries and utilizes them in innovative ways.  According to Keith, having more toys in the toy box to play with leads to more options, more fun, and more creative solutions to enabling the customer’s vision for a future entertainment offering.

Lastly, Keith offered some advice for young professionals just starting in the themed entertainment industry or trying to break into it.  Just as he had done that first summer at Kings Island, Keith suggests seizing every possibility that is presented to you.  Even if someone approaches you with a problem or task that you aren’t sure how to solve on your own, find or make some friends that can help you tackle the challenge.  Additionally, Keith suggested reaching out to volunteer or ask industry professionals for ideas for how to get involved.  Keith also emphasized the importance of being curious and interested in learning.